Motto:
When some unaccustomed idea of common sense appears in the world,
you may know it by this sign, that the dunces are all in confederacy against it

Paraphrase of the quote from Jonathan Swift's
"Thoughts on Various Subjects, Moral and Diverting"


Despite repeated protests, the articles about the name CZECHIA and also many minor edits mentioning the name, have been continuously deleted from English Wikipedia by several administrators, especially by "Yopie" and "Mewulwe" admins (nicknames), but also some other, predominantly Czechs, who have been focusing their efforts on erasing the word Czechia for years. Some journalists suggested it is a result of the struggle between supporters of the name "Czechlands" and "Czechia," but that information is not based on truth. The reason is both simple and absurd. All of those admins prefer to use "The Czech Republic," in every case, also in historical connotations and all of them do not like geographical name Czechia. Really great visiting card of unbiassed encyclopedy!

To "solve" the problem with historical issues or themes, which are somehow out of the time of existence of "the Czech Republic", some "salvation idea" came to their minds: they decided to put everywhere in articles of that kind some "introduction", how everybody should understand what is meant by e.g."Literature of the Czech Republic" and there is (as everywhere) written, it is the production of all history of the Czech state and mentioned all state formations in Czechia during centuries. This preface should help the reader to understand what country they keep in mind. This Kocourkov's (Czech Gotham) application overcrossing all absurdity conjoined with brainless insisting of exclusive use of the political name of the country. Of course, it cannot help at all, because usual reader is only totally confused, and, in addition, surprised by the presence of such as introduction, but mainly, it is spreading of untruth, because "the Czech Republic" does and cannot have that action potential, even if its lovers repeat it million times. The result is only confirmation of stupidity and POV (point of view, thus, subjective opinion), so frequently used by themselves in accusations of people, who are so "impudent" and "pushing", that ask for using geographical name of the country, which is universal and therefore can be used in general context without any idiotic and mendacious prefaces, presented by "Wikipedia wise men" on every page, which theme goes beyond their "Czech Republic".

On top of all, there is only one case in all English Wikipedia, where some country operates under two names in one issue, resp. when we can find two articles about the same theme - "Music of the Czech lands" and "Music of the Czech Republic" All that idiotic circumvention only for "the highest and most sacred goal" not to use the word Czechia at any cost. Thank you, wise men of Wikipedia!


Our article "Czechia - the one-word name of the Czech Republic" was deleted not only from Wikipedia pages but also from personal page of contributors, so dangerous it seems to be. In the case of the second contribution of us, "Czechia - the name dispute," a vote was held about the wiki page deletion and despite the outcome being favorable for retaining the article, it was deleted. All protests against that behaviour were ignored or repeatedly followed by threats of blocking the user, later by definitive block, when there was a struggle to repost and keep the information online. The "objectivity" of Wikipedia is sufficiently highlighted by this situation. The word CZECHIA is simply prohibited there. Who is that much interested in it being hidden is a mystery, but a particular political reason seems highly probable. 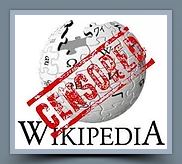